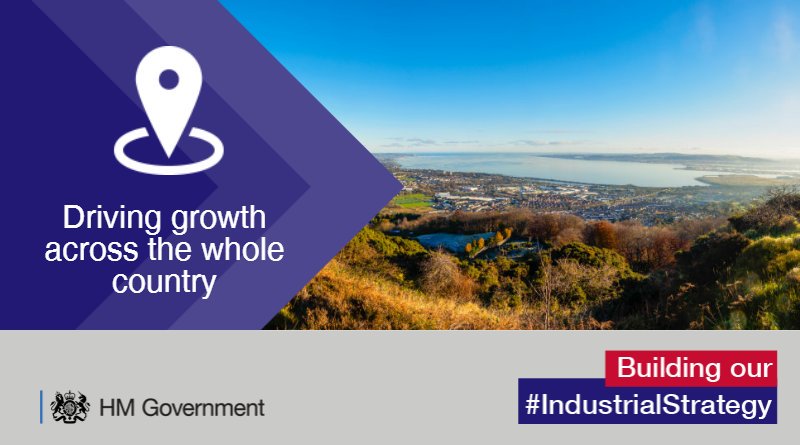 Business Secretary Greg Clark and Mayor Andy Street today (16 May) unveiled a new Local Industrial Strategy for the West Midlands – the first of its kind, which will build on the region’s strengths and deliver high-skilled jobs.

Launched at the region’s Advanced Propulsion Centre in Coventry, the local strategy builds on the strengths of the automotive and life sciences sectors that sit at the heart of the region, and comes alongside ambitious plans to develop the next generation of battery technology for electric vehicles at the UK’s flagship Battery Industrialisation Centre, backed by an additional £28 million investment.

As well as launching the Strategy in Coventry, Greg Clark will also showcase this ambitious strategy to local leaders across England at the Government’s first ever Industrial Strategy conference in London.

Those attending will include representatives from all 38 Local Enterprise Partnerships, as well as young entrepreneurs from each of the areas.

“The launch of this first Local Industrial Strategy in the West Midlands is testament to the local civic and business leadership in the region, builds on its continued success to ensure every community across the region reaches their potential.

“Our modern Industrial Strategy aims to boost productivity across the country by backing businesses to create good jobs and increase earning power. This Local Industrial Strategy is tailored to the specific challenges in the West Midlands, and will set an example for other regions to follow.

“Our funding for the UK Battery Industrialisation Centre in Coventry is a key part of this, and will see a world-class facility developed in this automotive heartland, further cementing opportunities, growth and inward investment in the West Midlands.”

“The West Midlands is already home to the industries of tomorrow. We have some of the world’s most competitive and innovative companies in advanced manufacturing, electric and autonomous vehicle development and medical research.

“This Local Industrial Strategy is about capitalising on those strengths to release the region’s full economic potential for the benefit of all our communities.

“That way we can build a prosperous future and a robust economy capable of meeting the challenges and opportunities of a technology-driven world.”

Productivity in the West Midlands grew at twice the rate of the UK average in 2018 and this new strategy – designed in partnership with the West Midlands Combined Authority, Local Enterprise Partnerships and developed in collaboration with hundreds of businesses, public partners and civil society – sets out how the region will work with Government to:

The West Midlands is the fastest growing UK region for goods exports, and the government’s national Industrial Strategy is further supporting economic growth and boosting local businesses through investments including:

"The West Midlands has always been a hotbed of creativity and innovation and it's appropriate that a region that was at the very heart of the Industrial Revolution is now leading the way with this ambitious Local Industrial Strategy.

"This is about nurturing the cutting edge companies and advanced manufacturers that play an increasingly vital role in our regional economy, while ensuring that people have the skills needed to fill the new jobs being created.

"Acknowledging that growth alone will not be enough, this strategy aims to deliver inclusive growth, driving up productivity and growing our regional economy in a way that can bring greater opportunities and prosperity to all our communities."

Coventry City Councillor Jim O’Boyle cabinet member for jobs and regeneration, and a director of the CWLEP, said:

“The petrol engine changed the world in a way people would not have thought possible. And now the march of electric vehicles is about to do the same again and I’m delighted that Coventry is once again leading the way.

“The construction of the UK Battery Industrialisation Centre puts Coventry and the wider area at the heart of this new technology which will transform the way we travel, create skilled jobs for local people and help to protect the environment.”

“As the first local industrial strategy to be launched, we hope the West Midlands Industrial Strategy will start a domino effect of robust strategies being rolled out across the country.

“It shows the real value of political leaders working with one another to unlock economic growth - creating jobs, driving productivity and improving living standards across communities.

“The West Midlands is well positioned to deal with the big challenges of tomorrow, with the Advanced Propulsion Centre delivering zero emission vehicles and the region’s development of the UK’s first multi-city 5G testing ground.

“The best way to build upon the strengths of the UK’s vibrant regions is for business and politicians to work closely together. Now is the time to redouble efforts on implementing the local industrial strategies, making their impact real to businesses and people across the country. Failure to address our stubbornly persistent productivity challenge is not an option.”

Today’s first Local Industrial Strategy comes as the Government holds the next round for its flagship Strength in Places Fund; a £236m fund that brings together research organisations, businesses, and local authorities to develop pioneering ideas that will deliver local economic growth and create high value jobs.

A copy of the West Midlands Local Industrial Strategy is available here.