The government have launched the largest ever government public information campaign to get public and businesses ready for Brexit. 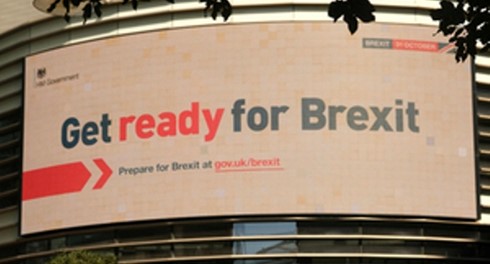 Today (1 September) the government launched its new public information campaign, ‘Get Ready for Brexit’, which will run across television, social media, billboards and other platforms.

Government research shows that only 50% of the population think it’s likely the UK will leave the EU on 31 October, 42% of small-to-medium sized businesses are unsure of how they can get ready and just 31% of the British public have looked for information on how to prepare for Brexit.

The campaign will tackle this head on by setting out what all members of the public and business owners might need to do, if anything, to get ready to leave the EU on 31 October.

Audiences including UK citizens intending to travel to Europe and all exporters to the EU will be targeted, alongside groups requiring particular information such as the equine industry and legal professions. Some of the key actions audiences need to take include:

Chancellor of the Duchy of Lancaster Michael Gove said:

"Ensuring an orderly Brexit is not only a matter of national importance, but a shared responsibility.

"This campaign will encourage the country to come together to Get Ready for Brexit on 31 October."

Advertising accompanied with targeted road shows and events will drive people to GOV.UK, which has a new checker tool so audiences can identify what they need to do to get ready for Brexit quickly.

There will be how to videos and step by step guides - so whether you are a small business owner, haulier or EU citizen residing in the UK - the actions you need to take to prepare will be clear and simple.